According to the Daily News, the Metropolitan Transportation Agency has rejected a proposed bus and subway ad denouncing enemies of Israel.  The poster was submitted to the MTA by blogger Pamela Geller earlier this month in response to ads in 18 stations urging the United States to end military support to Israel.

According to the MTA’s media management company, CBS Outdoor, Geller’s proposed ad (depicted below) violates MTA standards because it ”demeans an individual or group of individuals.” Geller has said she will sue, claiming that the MTA’s refusal to post the ad violates the First Amendment. 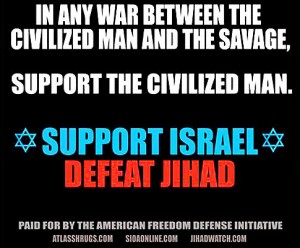