A judge has granted class-action status to potential plaintiffs whom New York City may have improperly jailed from 2009 to 2012, based on detention requests by federal immigration authorities.

Bronx Supreme Court Justice Mitchell Danziger said evidence presented by the plaintiffs so far in Onadia v. City of New York, 0300340/2010 <tel:0300340/2010>, indicates that as many as 9,100 individuals may have been falsely incarcerated by the city’s Department of Correction.
All those individuals were jailed on civil detainers issued by U.S. Immigration and Customs Enforcement (ICE), which authorizes holding arrestees for 48 hours after their scheduled release times in order to give immigration officials time to investigate the individual’s immigration status.

Attorneys for plaintiff Oscar Onadia estimate that the 9,100 individuals in the class were held for at least one day past the deadline set under the ICE civil detainer rules in effect from 2009 through December 2012. The average time spent by individuals in unauthorized detention was 14.4 days. More than 1,000 may have been held improperly for a month or more under ICE civil detainers, the plaintiffs said, citing estimates from an expert witness.
On Jan. 9, Danzinger ruled that because of the numbers of potential plaintiffs involved, a class-action designation is the best way to sort out the plaintiff’s contentions. He held that “common questions of law predominate the putative class,” primarily, whether their Fourth and Fourteenth Amendment rights were violated by the detention.

Matthew Brinkerhoff and Debra Greenberger, partners at Emery Celli Brinkerhoff & Abady, are representing the plaintiffs along with Ameer Benno, the attorney who originally filed the case as an individual action on Onadia’s behalf in 2010.

In an interview Friday, Brinkerhoff said it’s extremely rare for a state judge to certify a class action against New York City in state court. He said the large number of individuals who “got held for days or weeks at a time with no probable cause or justification” is likely to expose the city to significant exposure to liability if the allegations of constitutional violations are ultimately upheld.

According to Brinkerhoff, some of the alleged abuses may also date back to 2007 and 2008. Danzinger conceded that it will take some work to determine which plaintiffs can claim membership in the class, based on how ICE personnel filled out the civil detainer forms and how individuals were notified that the ICE investigation could result in their deportation. But the judge said that should not prevent the case from proceeding.

“Defendant’s complaint that it will be difficult to cull through thousands of inmate files to determine what detainer forms were used and what boxes were checked on such detainers does not create a basis for denying certifications,” he wrote. He scheduled a March 1 status conference in the case.
Onadia was arrested on Dec. 10, 2008, for unlicensed driving. During processing and arraignment, authorities discovered that he had a prior charge of unlicensed driving in April 2008, for which he served five days at Rikers Island. ICE filed a civil detainer, which notified the Department of Correction that it was checking on Onadia’s immigration status.
Despite language in the detainer saying he could be held only for 48 hours, excepting Saturdays, Sundays or holidays, Onadia said he was held illegally at Rikers Island until Jan. 23, 2009, or 42 days after expiration of the 48-hour period.

The civil detainer rules are spelled out in Federal Regulations 8 DFR 287.2.
Brinkerhoff said the wording of the ICE detainers has been modified several times, most recently in 2015. In addition, he said the New York City Council enacted the city’s administrative code in 2011 to prohibit the continued holding of people under civil immigration detainers unless they can show that the individuals have been convicted of serious or violent crimes, or their names match those in a terrorist database.
Assistant Corporation Counsel Chlarens Orsland represented the city.

THE NATIONAL ASSOCIATION OF DISTINGUISHED COUNSEL 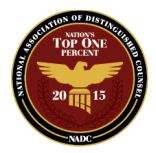 Ameer Benno, of Benno & Associates P.C., has been selected to the 2015 list as a member of the Nation’s Top One Percent by the National Association of Distinguished Counsel. NADC is an organization dedicated to promoting the highest standards of legal excellence. Its mission is to objectively recognize the attorneys who elevate the standards of the Bar and provide a benchmark for other lawyers to emulate.

Members are thoroughly vetted by a research team, selected by a blue ribbon panel of attorneys with podium status from independently neutral organizations, and approved by a judicial review board as exhibiting virtue in the practice of law. Due to the incredible selectivity of the appointment process, only the top one percent of attorneys in the United States are awarded membership in NADC. This elite class of advocates consists of the finest leaders of the legal profession from across the nation. 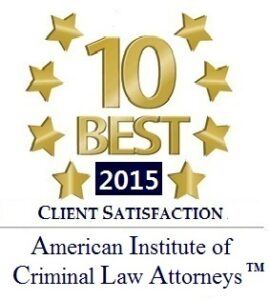 The American Institute of Criminal Law Attorneys is a third-party attorney rating organization that publishes an annual list of the Top 10 Criminal Law attorneys in each state. Attorneys who are selected to the “10 Best” list must pass AIOCLA’s rigorous selection process, which is based on client and/or peer nominations, thorough research, and AIOCLA’s independent evaluation. AIOCLA’s annual list was created to be used as a resource for clients during the attorney selection process. One of the most significant aspects of the selection process involves attorneys’ relationships and reputation among his or her clients. As clients should be an attorney’s top priority, AIOCLA places the utmost emphasis on selecting lawyers who have achieved significant success in the field of Criminal Law without sacrificing the service and support they provide. Selection criteria therefore focus on attorneys who demonstrate the highest standards of Client Satisfaction.

We congratulate Ameer Benno on this achievement and we are honored to have him as a 2015 AIOCLA Member.